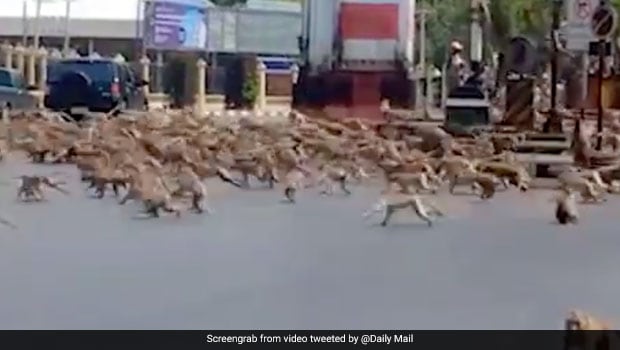 Monkeys are seen fighting over food in this viral Twitter video.

Due to rapid globalisation, anything that happens anywhere across the globe has an immediate effect on the condition of the economy, industry and the environment of all countries. All the three are impacted in ways that were hitherto unimaginable, thanks to the extreme interlinking of the world’s economies. A recent video that surfaced on social media showed monkeys in Central Thailand scrounging for the last morsel of food. Take a look:

Hundreds of hungry monkeys swarm across Thai street as ‘rival gangs’ fight over food after tourists who normally feed them stay away because of coronavirus https://t.co/lQZ0sOzwDFpic.twitter.com/8TgrCTBrQ8

The video was shared on Twitter by Daily Mail, and soon went viral with over 16 million views. There are several hundreds of monkeys in the video and they all seem to be vying for a single banana that one of them had found. Thailand is a country that has monkeys in abundance and they are usually well fed by tourists. But it is believed that thanks to the rapid spread of Coronavirus, the tourism industry in Thailand has been hit and now the native monkeys of the country are suffering the consequences of it.

According to reports in Bangkok post, the monkeys actually belonged to two warring factions- one living in the temple areas and the other living in the main city. Usually the two groups of monkeys are separated by a train track, but the quest for food got them on one side, which is what started the fight. Residents of the area captured the video, expressing their shock at how aggressively the monkeys were acting which was quite unlike their usual calm self. “They looked more like wild dogs than monkeys. They went crazy for a single piece of food. I’ve never seen them this aggressive,” said a resident to Daily Mail.

Twitter users poured in their reactions to the viral video. Take a look at some of them:

This is exactly why socialism doesn’t work

Africa will colonize Europe during this time of the Coronavirus……

Of we keep acting the way we are doing, this is going to be us.

What do you think about this viral video? Tell us in the comments below.