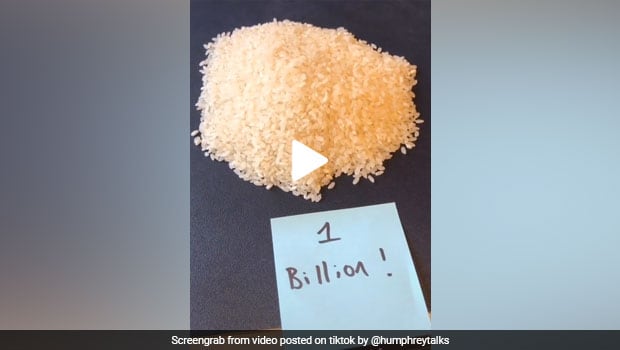 The current wave of TikTok videos that keep springing up on our social media feeds is enough to keep us entertained. Sometimes hilarious, sometimes thought-provoking – these viral videos have caught the fancy of most of social media users. The latest one that has made even the non-TikTok viewers look up and notice, is a video showing Amazon head Jeff Bezos’s net worth with the help of rice grains; and it goes without saying it was a mountain of grains.

The viral TikTok video was made by Humphrey Yang, who is an e-commerce consultant from Silicon Valley. He regularly posts finance-centric videos with subtle nuances of humour; but this latest video has put him in spotlight. In a 2-part video series, Humphrey used one grain of rice to represent USD100,000; so 10 grains made for USD1 million, and 10,000 grains depicted a total amount of USD1 billion.

The video generated quite a stir on social media, so Humphrey decided to come out with another video to measure how much pounds of rice would be needed to make an estimate of USD122 billion, which was supposedly Jeff Bezos’s net worth at the time of making the video.

(Also Read: This TikTok Video Of A Woman Snatching Food From People Is Winning The Internet)

The novel video shows how rich is the richest man in the world with the help of rice, and it humoured our Twitteratti to no end. It obviously drew out various funny, satirical and socio-political reactions from Twitter users.

One Twitter user wished to have just one grain of rice from the heap while another wanted to eat the rice with sauce. Here are some Twitter reactions on the viral video that will leave you in splits.

i wish i had even one grain of rice bahaha

Pass the soy sauce and let’s each the rich!

omg…i make a crumb of one piece of rice/year????

About Neha GroverLove for reading roused her writing instincts. Neha is guilty of having a deep-set fixation with anything caffeinated. When she is not pouring out her nest of thoughts onto the screen, you can see her reading while sipping on coffee.